The far right in the new Ukrainian Parliament

Posted on December 14, 2014 by ukraineantifascistsolidarity

A number of far right parties and individuals were elected to the Ukrainian Parliament (Rada) in the recent elections on October 26 in the lists of different parties or standing in single-mandate constituencies. Some are now part of the government majority and many have been elected to different positions in the parliamentary commissions.

The main far right party in the previous Rada, Svoboda (Freedom) went down in votes and elected members: from 2.1 million votes for the party list and 37 Rada members down to 740,000 votes and only 6 members elected in single-mandate constituencies.

However, the whole political spectrum moved to the right, with the “mainstream” parties of president Poroshenko (Block Poroshenko) and the prime minister Yatseniuk (Peoples Front) all pandering to radical right wing reactionary nationalism and having far right individuals in their lists or supporting them in single-mandate constituencies. To give an example, president Poroshenko declared October 14 the day of the defender of Ukraine in commemoration of the founding of the Ukrainian Insurgent Army (UPA) which during World War Two collaborated with the nazis and carried out atrocities against the Polish population. Poroshenko also declared that the UPA should be regarded as heroes and and example to be followed.

The main beneficiary of Svoboda’s decline was the right wing populist Lyashko’s Radical Party. Lyashko had spent most of the initial phase of the so-called “anti-terrorist operation” dressed in black paramilitary fatigues, participating directly in capturing, threatening and torturing “terrorists” in the East. He had also made an alliance with a section of the neo-nazi Social-Nationalist Assembly, with some of its members being elected to the Kyiv City Council on the Radical Party list. 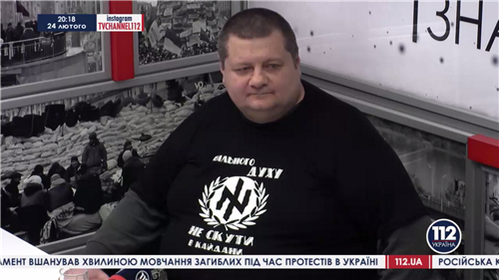 Lyashko’s Radical Party list, which received 1.17 million votes and elected 22 members, can be considered as a whole as far right, and includes particularly nasty neo-nazi elements like Igor Mosiychuk. Mosiychuk has a long past in neo-nazi organisations, having been part of the UNA-UNSO in the 1990s. The Ukrainian National Assembly – Ukrainian People’s Self-Defense was a violent fascist organisation which predates most contemporary far right organisations in Ukraine today. After the collapse of the UNA-UNSO in 1998, he joined the Social National Party of Ukraine, an openly neo-nazi organisation which later on in 2004 changed its name, toned down a bit its public rhetoric and became Svoboda. Mosiychuk then joined those who disagreed with the “moderate” turn of the SNPU to form the Social Nationalist Assembly, a hard line neo-nazi group. In 2011 he became a member of the executive of the SNA and acted as its press secretary. Mosiychuk spent time in jail as one of the defendants in the case of the Vasilokovsky terrorists. He was only released from jail after the victory of the Euromaidan. During the Euromaidan movement, the SNA was part of the violent Right Sector. After the victory of the Euromaidan the SNA went on to form 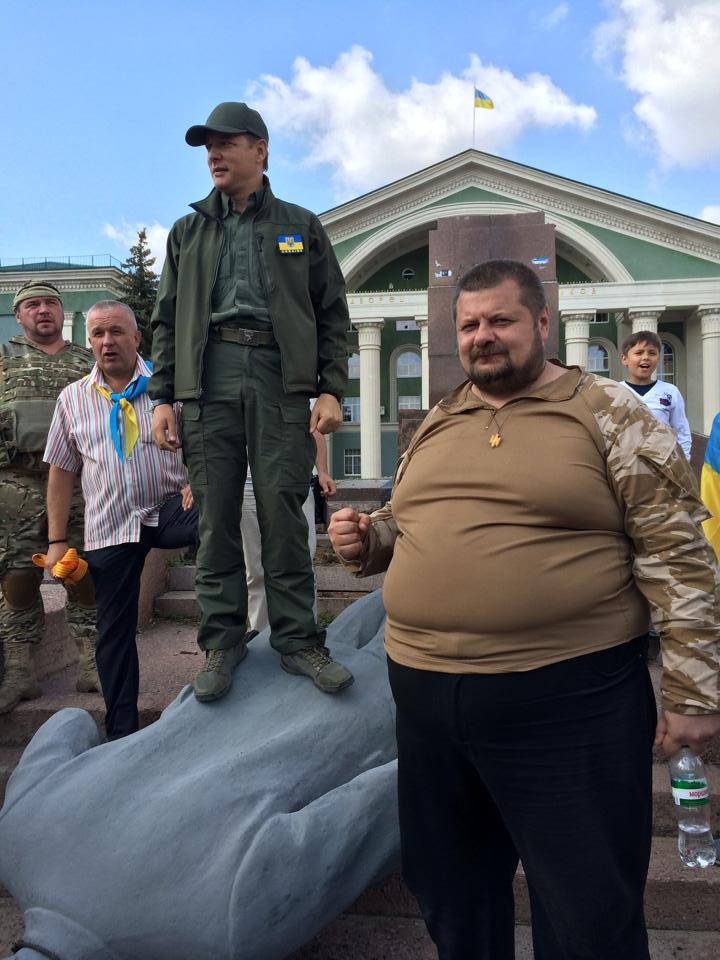 the infamous Azov Battalion of volunteers to fight against the uprising in the Donbas. They then became part of the Ministry of Interior Forces, but maintained their own command, composed exclusively of members of the SNA. Mosiychuk became a deputy commander in charge of press relations for the Azov Battalion. At the same time he became close to far right populist Oleg Lyashko. A number of SNA members stood in the Kyiv local election on Lyashko’s Radical Party list. Mosiychuk was elected as a Kyiv councillor. At the beginning of August he resigned from his position in the Azov Battalion so that the Battalion would not be too closely associated with Lyashko.

Also elected on Lyashko’s list is Dmytro Linko, a member of Bratstvo (Brotherhood), a party of far right Orthodox lunatics, led by Dmytro Korchynsky, who is also a  former leader of the UNA-UNSO. Linko is a commander of the Holy Mary Battalion, having been previously in the Azov Battalion and the Shakhtyorsk Battalion (disbanded by the Ministry of Internal Affairs for banditry). The wife of Bratstvo’s leader Korchynsky, Oksana Korchynska, also a leading figure in Bratstvo, was also elected on Lyashko’s list.

Lyashko’s Radical Party also elected Yury Shukhevich, the grandson of one of the historic commanders of the UPA Roman Shukhevich. In the early 1990s, Yury, already an old man who had spent many years in prison, participated in the refounding of the UNA-UNSO a far right organisation. During the Maidan movement he urged support for the Right Sector.

Lyashko’s far right Radical Party is now part of the 5-party ruling coalition. This makes the neo-Nazi thug Mosiychuk and others like him part of the government coalition. 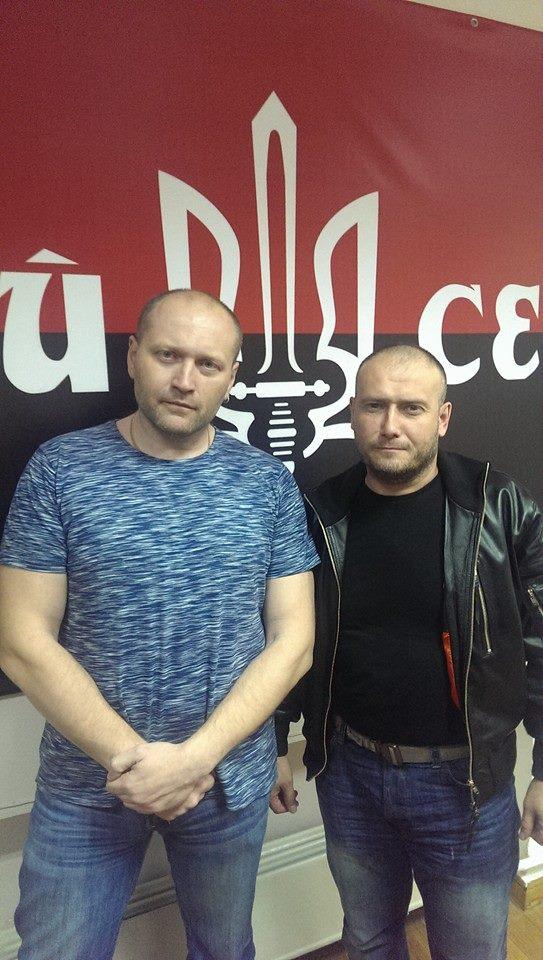 Two members of the far right Right Sector were elected in single-mandate constituencies, including its main leader Dmytro Yarosh and his second in command Borislav Bereza. Yarosh was elected in the 39 constituency in Dnipropetrovsk with 30% of the vote, after Yatseniuk’s Popular Front withdrew its candidate in his favour. Yarosh’s far right ideology is also well documented and can be traced back to the 1990s when he joined the fascist organisation Stepan Bandera Tryzub, which he has led since 2005.

Another leading member of the Right Sector, Andriy Denisenko, was elected in Dnipropetrovsk’s 26 constituency standing in the list of the president’s “Petro Poroshenko Block”. Denisenko who has been described as deputy leader of the Right Sector and leader of the neo-nazi organisation in Dnipropetrovsk came to fame when he led a group of paramilitary thugs who attacked unarmed people in Krasnoarmeysk during the Donetsk referendum on May 11, killing several of them (see the Paris Match report).

Then we have the case of Andriy Biletsky, the neo-nazi commander of the Azov Battalion, who was elected in the 217 constituency in Kyiv with 33% of the votes, after both Poroshenko and Yatseniuk refused to stand candidates against him. Biletsky also has a long past in the fascist movement in Ukraine. He was the leader of the Kharkov branch of the Stepan Bandera Tryzub since 2002. Later he joined the Social-Nationalist Party of Ukraine (SNPU) and organised its paramilitary wing “Patriot of Ukraine”. When the party became Svoboda, he rejected the “moderate” turn and went on to led Patriot of Ukraine as a separate organisation. Later on his organisation became de facto the paramilitary wing of Social-Nationalist Assembly of which he was a leading member. After being released from jail as a result of the victory of the Euromaidan movement he founded the Azov Battalion to fight against the Donbas uprising. 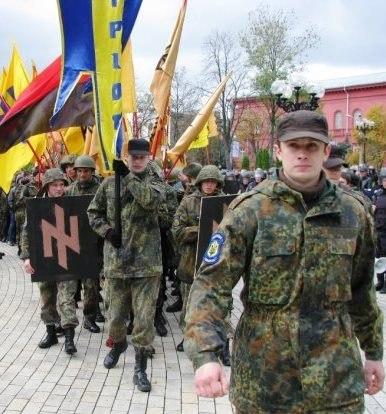 The Battalion has openly used a number of Nazi symbols which were used by the Waffen SS. He is also a member of the Military Council of the Peoples’ Front party created by Yatseniuk, Turchynov, Avakov and others. The party’s military council also includes the commanders of most volunteer battalions.

What emerges is that the main leaders of the main fascist and neo-nazi organisations are now involved in the volunteer battalions, formally under the authority of the up until now Minister of Internal Affairs Avakov. They have been given positions in the state apparatus and enjoy close links with one of the main parties in the coalition government, the Peoples’ Front.

There are other far right elements which have been elected in different party lists. For instance the commander of the Donbas Battalion, Simon Semenchenko, stood as number two in the list of Samopomich, another of the parties which have now formed the government coalition.

Another prominent member of the UNA-UNSO in the 2000s, a movement which subsequently collapsed and split, was Tetyana Chornovil, who was briefly a minister in the post-Maidan government and has now been elected in the Peoples’ Front list. Also a prominent leader of the Peoples’ Front and briefly part of the post-Maidan movement is Andriy Paruby, who in the 1990s was one of the founders of the fascist Social-Nationalist Party of Ukraine.

Also elected to parliament were a number of commanders of the Aidar Battalion, which has been accused by Amnesty International of carrying our “war crimes” including abductions, unlawful detention, ill-treatment, theft, extortion, and possible executions. The Battalion was disbanded in disgrace, but its main commander Serhiy Melnychuk has been elected to parliament in the list of Lyashko’s Radical Party (where he was number 3) and the other Battalion commander Ihor Lapin was elected for the Peoples’ Front in a single mandate constituency.

Immediately after the election, a prominent member of Patriot of Ukraine and Azov Regiment deputy commander Vadim Troyan was appointed by the then Minister of Internal Affairs Avakov as head of the Kyiv District Police.

In the process of electing the leading members of the different commissions, some of the most prominent neo-nazis in the Rada have been awarded positions by the dominant 5 party government coalition. Thus, neo-Nazi Ihor Mosiychuk, who has a record of a criminal conviction, has been elected the first deputy head of the parliamentary committee in charge of the law enforcement. The chairman of the parliamentary committee on national security and defence is Sergey Pashinski, the man who was famously caught during the Maidan protests with a sniper rifle. The first deputy chairman of the committee is Simon Semenchenko from the Donbas Battalion. Also deputy chairs of the committee are the Aidar Battalion Sergey Melnychuk, the leader of the Right Sector Dmytro Yarosh and the leader of Patriot of Ukraine (and Azov Regiment) Andrey Biletsky.

2 Responses to The far right in the new Ukrainian Parliament