Posted on April 11, 2016 by ukraineantifascistsolidarity 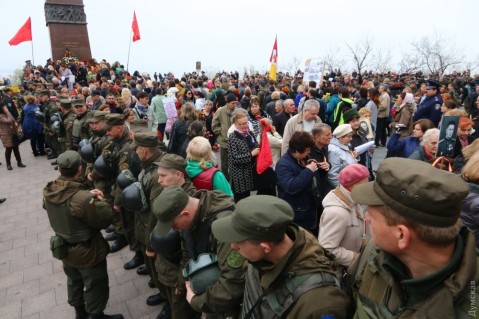 April 10 marks the anniversary of Odessa’s liberation from Nazism during World War 2. This year, neo-Nazi thugs from the Right Sector, Svoboda, Automaidan and the Maidan Self-Defence attacked those who wanted to commemorate the event and destroyed the Memorial at Kulikovo Field to those who died in the House of Trade Unions on May 2nd, 2014.

The day’s events started when neo-Nazi thugs, many in military uniform and wearing balaclavas, attack a crowd of a few hundred who had gone to the monument marking Odessa’s Liberation from Nazism to lay flowers and pay their respects.

Here’s a video of those who went to lay flowers at the monument, carrying Odessa city flags as well as red flags and how they are being harassed by the Nazis shouting ‘separatists’. They shout back ‘Banderites, get out of Odessa! Fascism will not pass!’:

This video shows the clashes at the monument:

The clashes then moved to Kulikovo Field, where the massacre of the House of Trade Unions took place on May 2nd, 2014. At that time several dozen anti-Maidan protesters were killed as far right thugs set the building on fire. Relatives and friends of the victims had laid flowers and erected a simple memorial.

This video shows the neo-Nazis attempting to attack the crowd and clashing with the police: 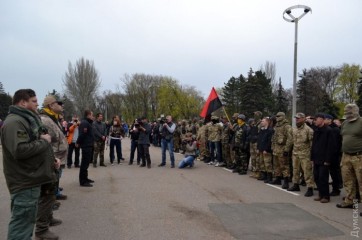 Right Sector and other neo-Nazis at Kulikovo Field

Again, dozens of neo-Nazis gathered there and broke through police lines until they were able to destroy the memorial and burn the flowers and St George ribbons that had been laid there. The St George ribbon is a symbol of the struggle against Nazism during World War Two as it was used in the medal which was awarded to all those who took part in the fight.

During the day a commemoration organised by the Union of Anarchists of Ukraine was also attacked by Nazis resulting in the leading figure of the organisation, Vyacheslav Azarov, being sent to hospital. As a result of his injuries he had to undergo surgery on his leg. [Source: 1TV Odessa]

VIDEO of the neo-Nazi thugs attack at Kulikovo Field. Despite clashes with the police none were arrested.

This entry was posted in Articles and tagged kulikovo, Liberation, may 2, Odessa, pravy sektor, Right Sector, Ukraine. Bookmark the permalink.