Posted on October 13, 2015 by ukraineantifascistsolidarity

Andriy Parubiy, is the deputy speaker of the Ukrainian parliament and a politician with a far right record. He is due to visit the UK to meet with government officials to advocate military aid for Ukraine. Here’s why we will be protesting his visit:

“Parubiy was the founder of the Social National Party of Ukraine, a fascist party styled on Hitler’s Nazis, with membership restricted to ethnic Ukrainians. The Social National Party would go on to become Svoboda, the far-right nationalist party whose leader Oleh Tyahnybok was one of the three most high profile leaders of the Euromaidan protests – negotiating directly with the Yanukovych regime.” Channel 4 How the far right took top posts in Ukraine’s power vacuum

In 1991, Parubiy founded the Social National Party of Ukraine together with Oleh Tyahnybok (the current leader of the far-right Svoboda party). The SNPU symbol, a modified nazi Wolfsangel, later became the symbol of the neo-Nazi Azov Battalion. The ideology of the SNPU was radical nationalism and neo-nazism.

“… of these various Ukrainian nationalist parties the SNPU was the least inclined to conceal its neo fascist afﬁliations. Its ofﬁcial symbol was the somewhat modiﬁed Wolf’s Hook (Wolfsangel),used as a symbol by the German SS division Das Reich and the DutchSS division Landstorm Nederland during World War II and by a numberof European neofascist organizations after 1945. As seen by the SNPU leadership, the Wolf’s Hook became the “idea of the nation.” Moreover,the ofﬁcial name of the party’s ideology, “social nationalism,” clearly referred back to “national socialism”—the ofﬁcial name of the ideology of the National-Socialist German Workers’ Party (NSDAP) and of the Hitlerite regime. The SNPU’s political platform distinguished itself by its openly revolutionary ultranationalism, its demands for the violent takeover of power in the country, and its willingness to blame Russia for all of Ukraine’s ills. Moreover, the SNPU was the ﬁrst relatively large party to recruit Nazi skinheads and football hooligans.” (Andreas Umland and Anton Shekhovstov, Ultra right Party Politics in Post-Soviet Ukraine and the Puzzle of the Electoral Marginalism of Ukrainian Ultranationalists in 1994–2009)

In 1998-2004 Parubiy was the head of paramilitary youth wing of Social-Nationalist Party ‘Patriot of Ukraine‘, which existed until December 2014 when it joined the Right Sector. The first Congress of the “Patriot of Ukraine” was held in Lviv on 12 December 1999 where it was officially adopted by the Social-National Party of Ukraine (SNPU) as its paramilitary youth wing. In the evening, around 1500 members of the SNPU and the “Patriot of Ukraine” staged a torchlight demonstration in the city. The first leader of the organization, Andriy Parubiy, established a long-lasting tradition of torchlight parades, which became an organizational trademark. It was described as having racist and neo-Nazi political beliefs.

“Indeed, anti-Semitism is part of the extremist party’s platform; until 2004, they called themselves the Social-National Party of Ukraine in an intentional reference to Adolf Hitler’s National Socialist party. Just last summer, a prominent leader of party youth was distributing texts from Nazi propaganda head Joseph Goebbels translated into Ukrainian.” (Der Spiegel ‘Prepared to Die’: The Right Wing’s Role in Ukrainian Protests)

A photo of Parubiy leading the “Patriot of Ukraine” march was placed on the cover of his book, ‘A view from the right‘, published in Lviv in 1999.

“Young men with loose long dirty hair and worn out jeans propagate dissoluteness and pacifism – that’s the result of expansion into Ukraine of American way of life and liberal ideology. Russian-speaking criminal world, devoid of spirituality, without national roots – is the legacy of communist rule in Ukraine.” Parubiy ‘The view from the right ‘ (p. 15) 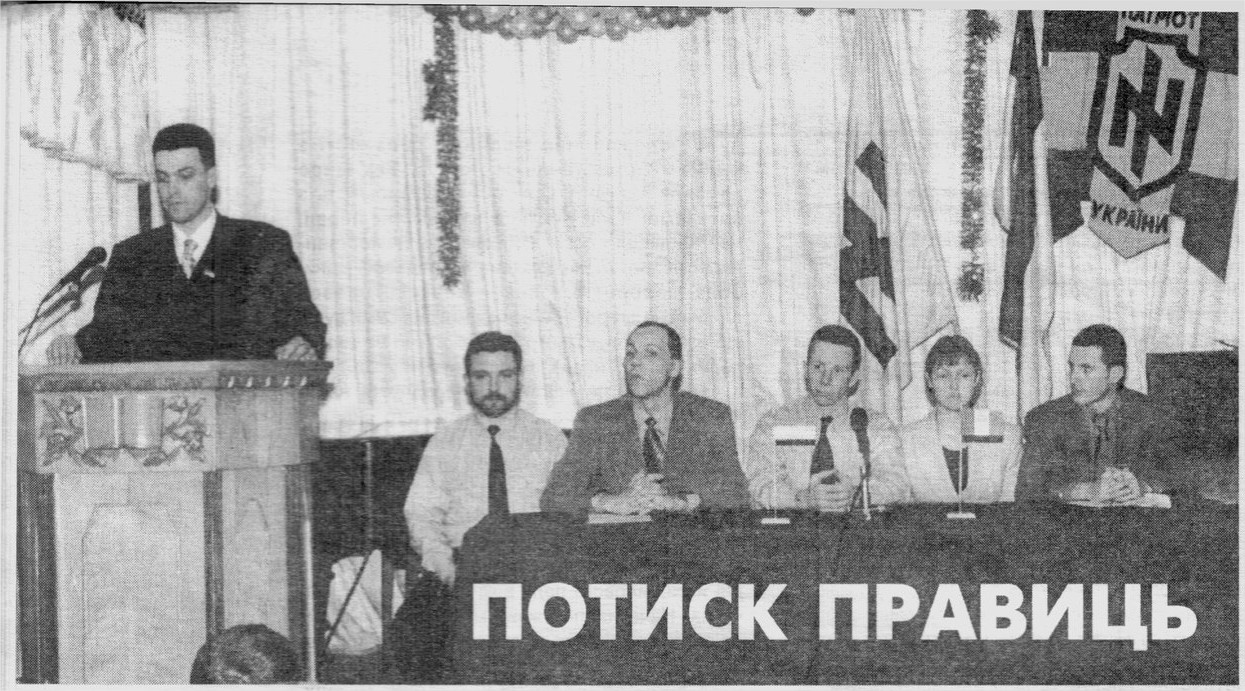 Parubiy (second left on the table) at a Patriot Ukraine meeting

“Parubiy and several other activists of Patriot of Ukraine were tried for beating Communist-led demonstrators in Lviv on November 7, 1997. In his interview, Parubiy said that main TV channels in Ukraine then broadcast videos of him personally beating the demonstrators. But the trial was moved to another region because of pressure from the far right. The criminal case was closed due to the statute of limitations. Parubiy projected a more moderate public image since 2004. But during the recent events he also cooperated with Svoboda and Pravyi Sektor. In 2004, the SNPU changed its image and name, to become Svoboda. At that point Parubiy left the organisation.” Reuters interview with Ivan Katchanovski, University of Ottawa, School of Political Studies

The 2004 change of name and image provoked a split, with Patriot Ukraine, the paramilitary youth wing led by Parubiy, refusing to join the new organisation Svoboda. They then continued to exist autonomously and went on to set up the Social-National Assembly, led by Parubiy’s trainee Andriy Biletsky.

Despite this change of image, his core views, far right Ukrainian nationalism based on the heritage of Stephan Bandera, did not change fundamentally. In 2010 he vocally campaigned against the European Parliament for its negative reaction to the declaration of Stepan Bandera as a Hero of Ukraine (as reported in the Kyiv Post). Bandera was the head of the OUN-UPA, a fascist organisation which collaborated with the Nazis during WWII and was involved in carrying acts of genocide against Poles, Jews and others (see Ivan Katchanovski  “Ethnic Cleansing, Genocide or Ukrainian-Polish Conflict? The Mass Murder of Poles bythe OUN and the UPA in Volhynia“)

The European Parliament resolution was clear on this question: “[it] deeply deplores the decision by the outgoing President of Ukraine, Viktor Yushchenko, posthumously to award Stepan Bandera, a leader of the Organisation of Ukrainian Nationalists (OUN) which collaborated with Nazi Germany, the title of ‘National Hero of Ukraine’; hopes, in this regard, that the new Ukrainian leadership will reconsider such decisions and will maintain its commitment to European values;”

The Euro Asian Jewish Congress historian Vyacheslav Likhachev described the SNPU and Parubiy in an article published in 2012:

“In their propagandist materials SNPU [Social-National Party of Ukraine] ideologues were more outspoken, describing the confrontation with “the Moscow influence” as a racial confrontation. The Ukrainian nation in the publications of the SNPU was proudly called the “root of the white race”. Ukraine was understood as an “Outpost of European civilization”, while Russia – as “Asiatic hordes”. Ukraine, according to one of the SNPU leaders (who subsequently have gone to “Our Ukraine” party) Andriy Parubiy, must “confront the aggressiveness of the pernicious ideas of the Asian world, which today is Russia”. Simultaneously with the Russophobia, SNPU ideologues professed (and still profess) anti-Western sentiment: from their point of view, “Marxism is internationalist and cosmopolitan liberalism are in fact two sides of the same coin”. Right-Wing Extremism in Ukraine: The Phenomenon of ‘Svoboda’ 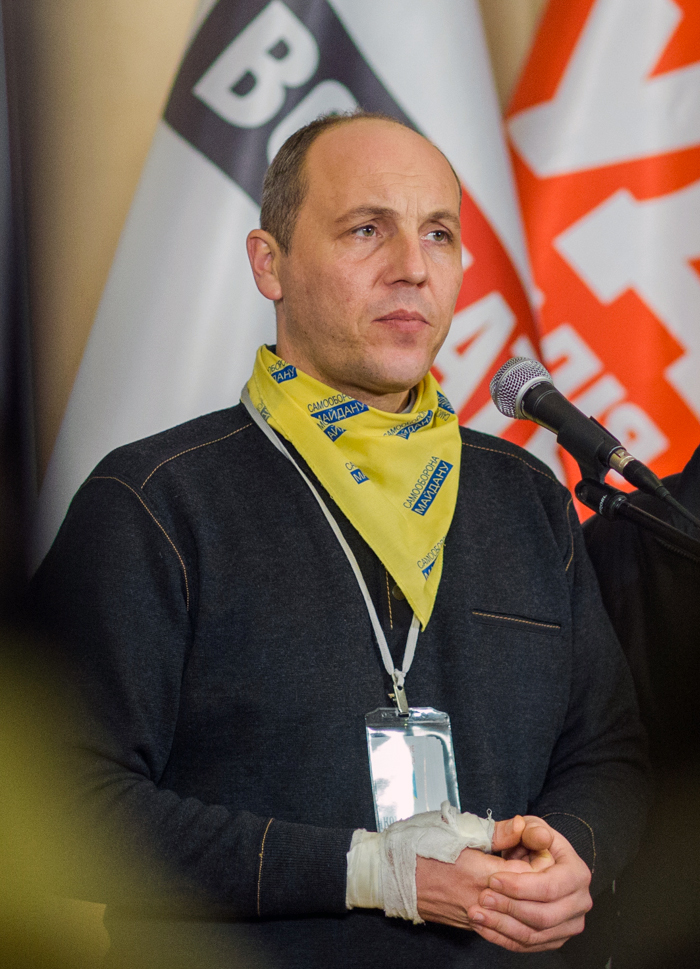 Parubiy, commader of the Maidan “defence”

During the Euromaidan movement, Parubiy was the “commander” of EuroMaidan, and the various Maidan paramilitary units had to take an oath of allegiance to Parubiy. This meant that neo-nazi paramilitary groups which had joined together under the umbrella of Right Sector (Pravyi Sektor) were operating under his authority. Amongst those was the newly reformed “Patriot of Ukraine”, led now by Andriy Biletskiy, who had been a pupil of Parubiy and went on to become the commander of the infamous Azov Battalion (which has the Wolfsangel as its symbol).

The ‘EuroMaidan’ movement overthrow a legitimate government by force and in the overthrow, the armed groups of the Maidan Self-Defence, Right Sector and others, played a crucial role, under the command of Parubiy. His name has also been linked by several sources to the organisation of the Maidan sniper fire which escalated the conflict after an agreement had already been reached. While this cannot be confirmed, the story has been reproduced in the Western and Ukrainian media.

“When the shooting started early on the morning of the 20th, Sergei says, he was escorted to the Conservatory, and spent some 20 minutes before 07:00 firing on police, alongside a second gunman. His account is partially corroborated by other witnesses. That morning, Andriy Shevchenko, then an opposition MP and part of the Maidan movement, had received a phone call from the head of the riot police on the square. “He calls me and says, ‘Andriy, somebody is shooting at my guys.’ And he said that the shooting was from the Conservatory.” Shevchenko contacted the man in charge of security for the protesters, Andriy Parubiy, known as the Commandant of the Maidan.” (The untold story of the Maidan massacre BBC 12/02/15)

After the victory of the Maidan, Parubiy became a prominent figure in the new regime being appointed as Secretary of the National Security and Defence Council a position he occupied until his resignation in August 2014.

Some have implicated him in the Odessa massacre of May 2nd, 2014. In a video widely available on the internet, he is seen, on April 29, 2014, delivering military grade bullet proof vests to a unit of the Maidan Self-Defence in Odessa. Receiving the vests is Mykola Volkov, one of the key players in the clashes on May 2nd which left dozens of people dead.

Mykola, who was wearing one of the bullet proof vests on May 2nd, has been identified on the day of the Odessa massacre arguing on the phone with someone in a position of authority that his men should be allowed through police lines to “take care of the rest”, in reference to the clash with anti-Maidan protesters, as shown in this video from EuroMaidanPR. Mykola’s men were allowed through and then burnt down the House of Trade Unions where the anti-Maidan protesters had sought refuge, killing dozens. In another video, Mykola can be seen shooting at anti Maidan protestors trying to flee the burning building by jumping out of windows. While Parubiy’s direct participation in the massacre cannot be confirmed, he delivered bullet proof vests three days earlier is established beyond doubt.

Three days before the bloody massacre, Parubiy also met with various security and volunteer forces as described on the website of the National Security and Defence Council of Ukraine:

“The meeting of the Operational center lasted over two hours; we discussed all the current issues and we adopted appropriate decisions to prevent destabilization of the situation in Odessa region. I have talked with the major law enforcement officers, we know the situation in detail for each department – they are willing to perform tasks”, Andriy Parubiy said following the results of the meeting of the Operational center.”  Andriy Parubiy was with working visit in Odessa region 30/4/14

The investigations of both the Maidan sniper massacre and the Odessa massacre have been criticised in Ukraine and abroad for their lack of speed and results. In his position as secretary of the NSDC, Parubiy is also responsible for having launched the socalled “Anti Terrorist Operation” in the Donbass as well as incorporating far right paramilitary battalions (the same he commanded in the Maidan movement) into the state apparatus.

In 2014, Parubiy became a founding member of the People’s Front party which has a ‘military council’, whose members include Biletskiy, leader of Azov Battalion and Ihor Lapin commander Aidar Battalion. In December 2014, Parubiy was elected first vice speaker of the Verkhovna Rada of Ukraine.

The photo shows him being congratulated by the commander of the Aidar Battalion.

As deputy speaker, Parubiy has been welcomed into Canada and the US, where he is begging these countries to send lethal weapons to Ukraine. Lethal arms that will be used in the continued military onslaught against the Donbass.

Parubiy is now due in the UK to speak with government officials and think tanks. Solidarity with Antifascist Resistance will organise a demonstration outside the Ukrainian Cultural Centre in Holland Park where he is due to speak on 23rd October at 7pm. We call on the British government to ban him from entering the UK.

NO PASARAN! NO TO UK LINKS WITH UKRAINIAN FAR-RIGHT!

This entry was posted in Articles and tagged parubiy, patriot ukraine, snpu. Bookmark the permalink.

2 Responses to Who is Andriy Parubiy? Protest UK visit of Ukrainian politician with far right links